We’ve had these drawers in our garage for months. They were part of an old bed and my husband was about to throw them out during some Spring cleaning. Then he stopped and said, “…Unless you want me to add legs and you can grow your herbs in them”. He’s genius, right?

The beds themselves cost us $0 because we used things we already had on hand. I spent about $35 on the soil and herbs.

These were crazy easy. All he did was use a few 1x4s to make the legs and screw them in. He also drilled holes in the bottom to allow for drainage.

Then it was my turn to pretty them up!

I sealed them with Minwax Clear Satin Spar Urethane since they’ll get a lot of water on them. Sticky stuff! WEAR GLOVES. I did not and I had to scrub my hands for an hour and resort to using Acetone to get it off! Use an old or cheap paintbrush too because it’s not worth trying to clean if you ask me! (It’s not sticky when it’s fully dried for the record).

Then I headed to Home Depot for some organic soil and herbs which turned out to be on sale for $2. Score!

If you want to know what I planted I did Sweet Basil, Lemon Thyme, Lavender, Sweet Mint, Flat-Leaf Parsley, Rosemary (my favorite!), Greek Oregano and Garden Sage.

I bought some $1 each spoons at Target and used a hammer to stamp on letters for garden markers. I’ve had the metal stamping set for over a year and never used it until now. I honestly had no idea what they were for when they came in a Pick Your Plum grab box of assorted craft supplies.

The ugly plants in the background are actually rose bushes…hopefully they’ll bloom soon now that Spring is here.

We put the herb beds out front because it gets the most sun, the dogs and kids can’t mess with it, and just because it’s pretty!

I couldn’t resist the cute watering can ($14) and the matching garden shovel (clearance, $3) at Target last week! (P.S. The table they’re on in the below pic used to be black. I painted with with Annie Sloan Chalk Paint in Provence last summer and it’s been outside all year. No sealant. Just the paint and it’s held up awesome!)

It’s a great little spot for the Hubs and I to watch the kids while they play out front or to sit out and enjoy a glass of wine after they’re in bed!

The cushions are also from Target and the color is called “Azure” (our puppy ate the old brown ones that came with the chairs, which are also chewed up if you look close!). You can find the giant Burlap Spring Wreath Tutorial here and the Rock Vase tutorial here.

Dawn is the Hand-Lettering Artist, Illustrator, Designer, Tombow Senior Brand Ambassador, and the Creative Blogger behind Dawn Nicole Designs®. She is an Air Force wife and mom of three who has done licensed artwork and hand lettering for companies and brands such as Hobby Lobby, TJ Maxx, Krispy Kreme Doughnuts, and the Silhouette Design Store. You can usually find her with a marker in one hand and a dark-roast coffee in the other.

New On the Blog 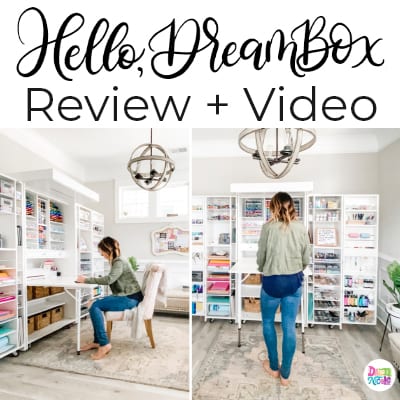 Get a FREE exclusive custom lettering worksheets every month!

BLOGGING AS A CREATIVE BUSINESS

Blogging is the best job ever!
Want to learn how to rock creative blogging?
I teach others how I blog as a full-time business.
Click here to join my free e-course